Well hello! Where did January go? I don’t know about you, but for me, it’s zipped by in the blink of an eye. I’ve been so busy but I’ve actually loved every minute of it. I started January with some big changes ahead of me, some of which were out of my control, like my baby starting pre-school. We’re a couple of weeks in now and it seems to be going well. The first week was surprisingly easy, then the novelty kinda wore off and the reality of going to school every day set in and he started to cry when it was time for him to go in. Which in turn made me cry, watching him through the school gates, being carried across the playground with his arms reaching out for me and calling for me. That was hard. But thankfully, he seems to have gotten over that and goes in fine. At home time, seeing his little face beaming and calling mama, while he runs over to me, well that just makes my heart burst! He’s obviously very happy when he’s there which is fantastic. My little boy is growing up!

One of the other big events for me was launching my little crafty empire, Florrie & Rene. I’ve tried to put as much time into it as possible, promoting the page, spreading the word etc. It’s going well so far, I’ve had a few orders which I’m almost done with. Here’s a couple of the finished ones..

These have been very well received by their new owners which makes the days of hooking my fingers to the bone all worth it. I’m very much looking forward to what the future holds for my one woman show.

The third big thing happening in my life this year has been my Slimming World journey. The first week had my head in a spin just trying to understand it all but now I’ve got used to it a bit it’s so much better. The first week I managed to lose 2 1/2 lbs which I was very happy with. It was just what I needed to hear to give me the motivation to keep going. By the end of the second week , I actually started to feel better in myself and could see I’d lost some weight around my tummy. That week I lost 3 1/2 lbs! The third week, I was doing everything I should have been doing but just felt really bloated and quite sluggish. I was convinced that I’d either gained weight or at best maintained. I was quite nervous to step onto the scales on Monday, but I needn’t have worried, I lost another 2lbs. Phew! And look what I picked up… 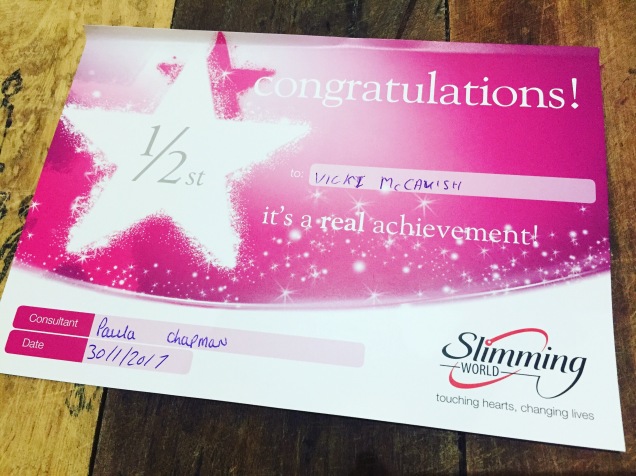 My first award! It feels good knowing my hard work and dedication is already paying off. Although I’m not yet properly organised with my meal plans, I have enjoyed trying new recipes, new foods, and knowing that I’m eating healthier. I’ve actually surprised myself at how good my willpower has been (thus far  anyway)! I’ve been able to buy chocolate and treats for the kids without being tempted to nibble. I’m going to have a go at baking some SW treats this week as I do miss getting my pinny on and there’s some yummy looking recipes in the latest SW magazine.

With all that’s happened in January, it’s left me in a very positive mood. Not that it’s like me to be down or anything, I’ve always been, ‘ever the optimist’ and a glass half full kind of girl. But I feel a sudden surge of energy and positivity and am happy to ride this wave for as long as it lasts. And spring is not too far away now and I CANNOT wait for some warmth, fresh air and the signs of new life that comes with possibly the best season of all.

Sending positive vibes out to you all…. x